Dog tags. They've been around for years. The earliest forms of ID tags can be found as far back as 400BC when Spartan soldiers used to break a stick in half with specific markings on them. The survivors would collect their other half after battle so the Spartans could count their dead. Since the Taiping revolt in 1851 the Chinese Imperial Army and the Taiping rebels wore a wooden tag clipped to their belt bearing the soldier's date of enlistment, name and date of birth. In the Franco-Prussian war in 1870 the Prussian army was issued identification tags nicknamed Hundermarken. In the first World War they were produced in aluminium, stamped with the name, date of birth, rank, and regiment.

Identification badge manufacturers originally designed the pins in a shape denoting the branch of service with an engraving of the soldier's name and unit. In 1862 the U.S. Army refused a proposal for a uniform disc for the officers but in 1906, The U.S Army recognised the importance of identification and authorised aluminium tags. By 1916 the U.S Army started using a serial number system, this number would now be stamped onto the dog tags along with name of the enlisted and any medical alerts including blood type.

These identification tags may contain identical information on both tags; some nations use these allowing one half of the tag (or one of two tags) to be broke off, leaving the other half with the corpse when battle conditions prevent safe recovery of the deceased.

Silencers and The Vietnam War

Gorilla warfare in the Vietnam War made it absolutely essential to remain silent when preparing and avoiding an enemy ambush, some soldiers either taped their dog tags together, some removed one and tied it to their shoe lace. Not until the Vietnam War did the use of silencers come into practice to help disguise the noise made by the two tags. 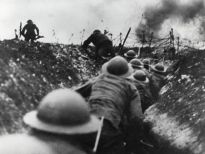 The British forces in Australia, New Zealand and Canada issued identification tags from the beginning of the First World War. These discs, one in red and one in green, were made of fibre and were suspended around the neck using butcher's twine (string made by twisting together fibres of hemp or cotton,). In 1906 the U.S. Army issued aluminium dog tags stamped with the name, rank, company, regiment or corps of the wearer whenever the field kit was worn. In 1916 the U.S. Army changed regulations for both tags to be the same, one to be left with the corps when in battle it was unsafe to recover the body, and the other half taken back to take note of the casualty. This is where they used and allotted the serial number system.

Duplicate identification tags were used by German troops which were already pre-cut, so they only needed bending back and forth before they snapped clean so one half could be taken away whilst leaving the corpse for retrieval at a safer time. It would seem that according to wartime photos, that many men did not wear their dog tags around their neck as they were instructed to. German dog tags (nicknamed Hundermarken) used a special coding system which proved to be more trouble that it was worth. Without specific name and other details, some ID tags were accidentally exchanged for others, causing thousands of men to remain unidentified.

We have an impressive range of tags including our classic military, silver, copper, medical alert and pet range.